What Is Power Ledger? Should I Buy POWR for Long-Term Investment?

An Australian blockchain startup Power Ledger has raised $34 million in an initial coin offering (ICO). The price of POWR tokens has been on a constant and steady rise ever since the completion of its ICO. What is Power Ledger and why everyone is talking about it? Definitely, it has an enormous potential as it is focused on energy trading applications. Should you buy POWR for long-term investment? Read on to find out. 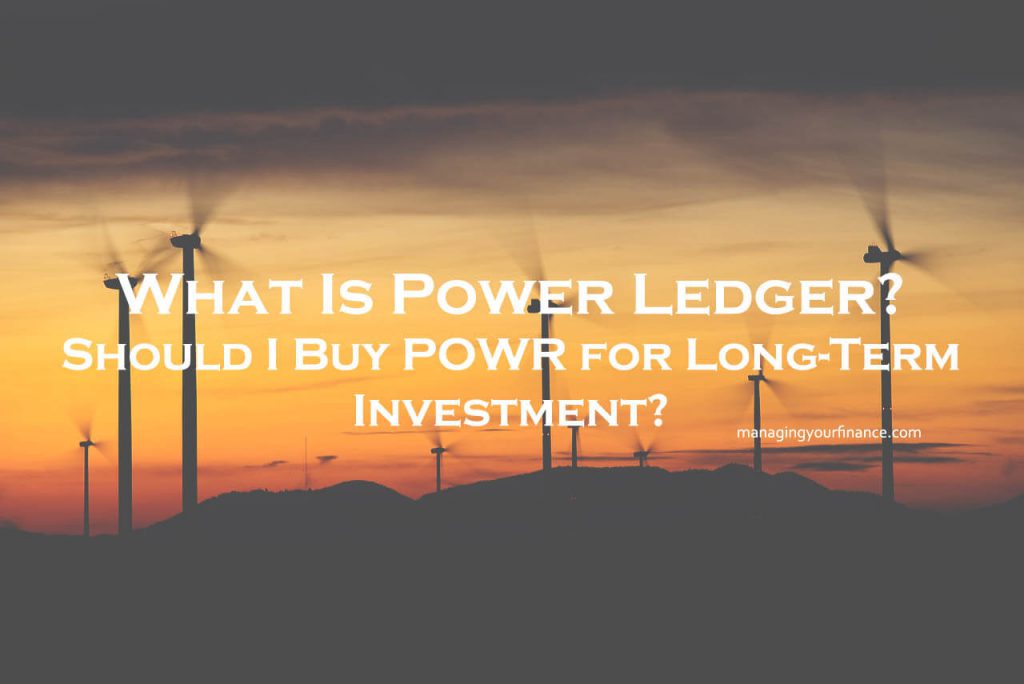 What Is Power Ledger?

Power Ledger is a peer to peer energy trading system that enables consumers to trade electricity with one another and receive near-instant compensation using a decentralized and trustless blockchain based trading platform. Power Ledger allows for each unit of electricity to be tracked from the point of generation to the point of consumption within the building it is generated, or when sold to other consumers, using the local electricity distribution network.

Firstly, declining utilization of electricity networks which could be maintained through a marketplace for distributed energy assets and associated transactions underpinned by the blockchain (e.g. peer to peer trading across networks).

Secondly, low penetration of renewables in apartment buildings, where a shared ownership and allocation model for microgrids could be provided by the blockchain (e.g. peer to peer trading in buildings)

Meanwhile, Power Ledger’s POWR tokens were designed to create a platform of interoperable applications rather than one business model, targeting one market. These POWRs are tradable on the Ethereum blockchain, and can also be converted to Sparkz, the currency that Power Ledger has set up for its users to trade electricity.

According to Power Ledger’s white paper (PDF), these trades can be set up in different ways, depending on the needs of those employing them. In the case of its current projects, trading units of self-generated solar power or self-stored battery energy. In this sense, Power Ledger’s new raise has seeded the market for its solar trading concept, just now being rolled out in pilot projects in Australia and New Zealand.

When POWR tokens first began trading in early November 2017, they were priced at less than six cents. Since then, the Power Ledger price has increased exponentially. At the beginning, the main reason for the price surge appears to be the announcement that Power Ledger will be participating in a government-funded blockchain trial. The project is testing the blockchain to determine how cities can use the technology and data analytics to integrate distributed energy and water systems.

More and more people will reach a point where it becomes cheaper for them to invest in the hardware to have their own solar operation, and doing so will create greater surpluses of energy. Currently, when people do that, they do not have a great bargaining position as they can sell it for whatever the grid is willing to pay, or they can just not sell it.

Power Ledger’s platform enables households and businesses to trade power from solar panels and battery storage, and it also facilitates the crowdfunding of renewable energy assets.

There’s a dual token system in place for Power Ledger, similar to that of Factom:

1. POWR Tokens: Serves as the fuel of the Ecosystem. In order to participate in the platform, you need POWR to generate Sparkz

2. Sparkz Tokens: Represents the value of a unit of energy and will be pegged to the domestic currency (i.e. Aussie Dollars). Sparkz is the currency that will be used for transactions within the Ecosystem

P2P Trading: This Platform application allows ordinary consumers to trade energy with each other and be compensated in real time using a peer to peer trustless reconciliation system. Other benefits also include the ability to receive more money for access power, low-cost settlement costs, being able to trade with neighbors, benefit from transparent blockchain based trading and selecting an eco-friendly energy source, which in all brings down power bills and improved returns on distributed renewable energy.

Neo Retailer: Management of consumer exposure to the risk of non-supply; payment settlements and almost instantaneous remuneration as well as smart demand and supply management are provided through this Platform Application.

Autonomous Assets (AA) Management: The AA Management Platform application makes possible (i) Trading renewable asset ownership; (ii) Collective ownership of renewable energy assets and is able to autonomously distribute its own income to assigned wallet addresses by buying and selling its own electricity.

Power Port: A Platform application classes whereby roadside assistance and virtual pipeline type assets can be automated by the platform, e.g. EVs, and mostly self-sufficient energy consumers can be provided with a facility for mobile energy storage discharge.

Carbon Trading: Carbon certificates/ credits are surrendered to regulatory authorities in the form of reports. This is in addition to the Platform offering transparency and auditability, immutable distributed ledger technology backed credibility of asset and smart contracts for carbon traders to assure digital transactions across organizations.

Transmission Exchange: Rapid transaction settlement; network load balancing; right to access and dispatch assets; collection of big data; responding to non-stationary energy, as well as real-time metering data can all be provided by the Platform in the quest to quest to manage transmission networks.

Application Development: Electric Vehicle Trading Applications and Microgrid/ Embedded Network Operator/ Strata will be the first applications to be in beta testing after the first token generation event.

Begin Distribution of Growth Pool: POWR tokens will be distributed to early application hosts to incentivize their use and contribution to the Platform.

Technology Layers Transition: The transition to a fee-less Consortium Etherium Network will be completed.

Marketing and Partnerships: As new Applications are developed potential Application Hosts will be targeted and/or Power Ledger may directly deploy the Application.

Frequent Asset Germination Events: The intrinsic value of the token will be further driven as Power Ledger and its Application Hosts conduct frequent asset germination events.

Transition to Public Blockchain: Power Ledger will eventually be operating full-scale on a public blockchain.

Powerport and Future Applications: BETA test Distributed Market Management and Wholesale Market Settlement, as well as the Powerport Application and beyond!

Bill Tai is CEO at the helm of Power Ledger as Advisor to the board, and a world-renowned Venture Capitalist who is currently chairman of Treasure Data and also a board member at Voxer and BitFury. He was originally trained as a chip designer and worked at Silicon Valley Startup LSI Logic, and holds a BSEE with Honors from the University of Illinois. After obtaining his MBA at Harvard he joined TSMC, where he was issued with badge #A001, and TSMC is now one of the most valuable tech companies in the world.

Sebastian Quin-Watson, Ambassador: is a Singapore and New York-based partner at ICO advisory firm Blockchain Global. He and his team have been behind some of the world’s earliest and largest blockchain ICOs, having invested over $60million in teams that have proceeded to raise over $310million in 2017. With his background in international corporate law and founder of a successful Beijing Fintech company, Sebastian will bring his large global support network to fast-track Power Ledger’s mission.

Dr. Jemma Green, Co-Founder and Chair, will formulate strategic external relations, leadership development and risk management to Power Ledger. She has 11 years experience in investment banking and 15 years in finance and risk advisory and obtained her Master’s degree plus two postgraduate Diplomas from Cambridge University. Sh also chairs Climate-KIC Australia and is a founder of the Global Blockchain Business Council and also contributes articles to Forbes on blockchain disruption.

David Martin, Co-founder and Managing Director, who is responsible for the day to day operations of Power Ledger and its technology’s commercialization, working to champion the acceptance of peer to peer energy reading, which in turn will reform regulations to cultivate the desired democratization of energy. He has 20 years experience working at state utilities and for the past 6 years has been working as a senior consultant in the energy field advising industry participants on DNSP and distribution network regulation.

Dr. Govert van Ek, Co-founder & Director, 2015 co-founder of leading Australian blockchain company Ledger Assets, before which he managed a number of private and listed companies. He also obtained a Ph.D. from Manchester University in Total Technology and launched his founded his own software company in 1991. His wide experience ranges from being a business founder, investor to concept development, systems architecture and design as well as commercial matters and Artificial Intelligence.

Should You Buy POWR for Long-Term Investment?

The Board of Directors consists of experienced individuals in the field of renewable energy and Blockchain technologies, headed by Dr Jemma Green. She has considerable experience in investment banking and a research fellow at Curtin University Sustainability Policy (CUSP) Institute. The Power Ledger team has a vibrant mix of energy specialists, legal expertise and consist mostly of developers and software engineers. It looks like a good line-up for what they’re building.

Power Ledger already has “proofs of concept” in the form of successful pilot projects in Australia and New Zealand. With the support of some established energy retailers, they’ve deployed their first commercial project in 2017, becoming the first Australian company to “facilitate electricity trading across the meter and manage settlements without going through an electricity retailer”. They also partnered with Synergy, Western Australia’s state-owned retailer, to deploy the first blockchain-based trading environment for electric vehicle charging.

Power Ledger has the vision to solve a massive problem with electricity prices and renewable energy. The ultimate goal is to create a power system that doesn’t rely entirely on centralized utility companies: it’s a low-cost, zero-carbon power generation system “owned by the people of the world.”

PowerLedger eliminates the wait time by creating an instant transaction between buyer and seller. By cutting out the middleman, it means sellers earn more and buyers pay less. A win-win on both sides. While renewable energy is ubiquitous, we will always have to pay for electricity one way or another. You will be investing in something we will always need – energy.