What Is Cryptocurrency Trading? What Trading Strategies for Beginners? 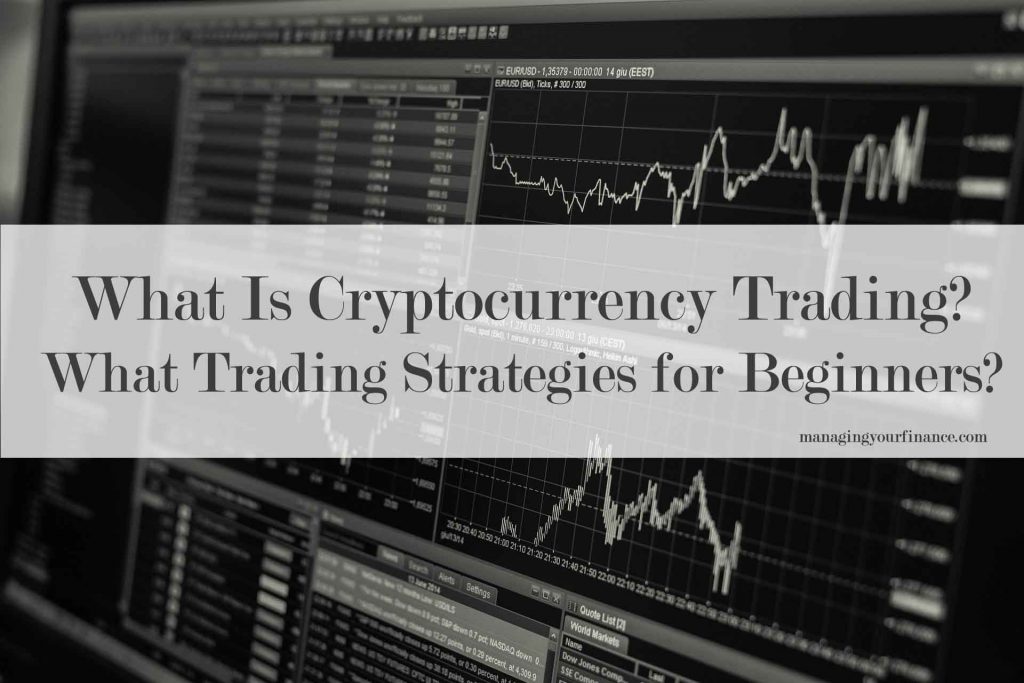 Disclaimer: The content below should not be taken and viewed as investment and trading advice, but only information and opinions. This article is for information and illustrative purposes only.

What Is Cryptocurrency Trading?

First of all, you need to know what is cryptocurrency.

Cryptocurrency is more than just a bunch of digital numbers that people have decided to use as money. The technology that was brought forth by Bitcoin is essentially a decentralized public ledger system, known as the Blockchain. It is a form of digital money that is designed to be secure and, in many cases, anonymous.

Cryptocurrencies use decentralized technology to let users make secure payments and store money without the need to use their name or go through a bank. They run on a distributed public ledger called blockchain, which is a record of all transactions updated and held by currency holders.

The first cryptocurrency was Bitcoin, which was created in 2009 and is still the best known. There has been a proliferation of cryptocurrencies in the past decade and there are now more than 900 available on the internet. This cryptographic Blockchain technology is what makes Bitcoin, Litecoin, Ethereum,  IOTA, Stratis, AntShares, and other Bitcoin-alternatives a “cryptocurrency.”

Cryptocurrency trading is the Forex (Foreign Exchange) of cryptocurrencies of all the 900 (or more) coins in the market. This means you are able to trade different Bitcoin and altcoin normally for USD and BTC.

Cryptocurrency trading can be extremely profitable if you know what you are doing, but it can also lead to disaster.

Usually, cryptocurrency trading is done via an exchange, and you need to have acquired a virtual ‘wallet’ to hold them, which can make for a time-consuming process.

What Is a Cryptocurrency Exchange?

Cryptocurrency exchanges are websites where you can buy, sell or exchange cryptocurrencies for other digital currency or traditional currency like US dollars or Euro.

There are some exchanges that will let you purchase specific cryptocurrencies for USD, but it’s a better idea to buy Bitcoin first. With some Bitcoin, you can trade into and out of every other cryptocurrency on the market, on every crypto exchange.

If you don’t have any Bitcoin, The safest, most popular place to purchase Bitcoin is Coinbase. The reason why we recommend Coinbase is you will get free $10 Bitcoin if you buy Bitcoin for the first time with them. 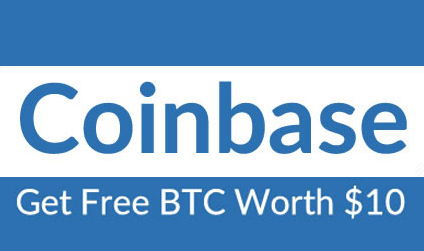 Alternatively, you can also go to an exchange that has a USD-BTC pairing to try to trade USD for Bitcoin at a cheaper rate (to be covered later).

For those that want to trade professionally and have access to fancy trading tools, you will likely need to use an exchange that requires you to verify your ID and open an account. If you just want to make the occasional, straightforward trade, there are also platforms that you can use that do not require an account.

The first thing you will need is a safe and secure platform to trade your cryptocurrencies. There are a few exchanges in the market, to start with, you can try CEX.io as it has a simpler dashboard that is easier for beginners to navigate around, which takes just a few minutes to set up.

You’ll then be able to log in to the platform, where you’ll see Bitcoin and Ethereum quoted against a major currency, such as USD, EUR, GBP, and in your local currency.

To start with, you can transfer your cash to CEX.io via bank transfer. Buying Bitcoins with cash on your bank account is very beneficial, especially for large deposit amounts. You can also use SEPA for easier deposits in Euros.

After funds are successfully credited to your account, you can easily buy Bitcoins right away. Bitcoins then can be kept on your balance in a safe cryptocurrency cold storage, traded, or withdrawn to personal wallets at any moment.

Alternatively, you can buy Bitcoins with credit cards if bank transfer is not favorable in your country. Literally, CEX.io provides an opportunity to buy Bitcoin in just a few clicks with almost any type of the card issued in any currency of the world. Card credentials are safely stored in the card manager of each user’s profile. A PCI DSS certificate confirms that they store, process and transmit data securely. 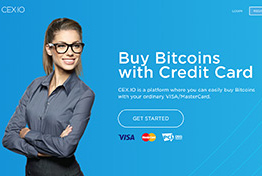 Note: You don’t have to buy a whole Bitcoin (1 BTC). You can purchase Bitcoin in fractions known as Satoshis. For example, 500k Satoshis equals 0.005 Bitcoin.

How Do Bitcoin Exchanges Operate?

Bitcoin exchanges are just like any other physical currency exchanges. You’re essentially buying one currency with another.

The relative value of a nation’s physical currency is a reflection of the country’s economic and financial health, especially since we moved off of the gold standard. The U.S. dollar, for example, is worth more than that of the Mexican peso due to the discrepancies between the two countries’ economies—therefore you can buy lots of pesos for very few dollars (the dollars being relatively more valuable). The below example shows the value of Ethereum (ETH) to Bitcoin (BTC).

Exchanging is done by placing “Buy” or “Sell” orders, which the exchange system software then matches with each other.

“Buy” orders (or “bids”) are offers to buy Bitcoins in exchange for another currency at a maximum price-per-bitcoin which is set by the offeror.

“Sell” orders (or, “asks”) are offers to sell Bitcoins at a minimum price-per-bitcoin.

Communication with the Bitcoin currency exchanges is commonly done using a standard web browser, over a secure SSL connection.

What Trading Strategies for Beginners?

Why would the value of a cryptocurrency go up?

The value changes due to supply and demand. The more demand there is for something, the more people are willing to pay for it.

Cryptocurrencies are volatile and can be traded 24/7. It’s important to closely follow the news and to understand how the market may interact with certain types of information and you need to know the ins and outs. 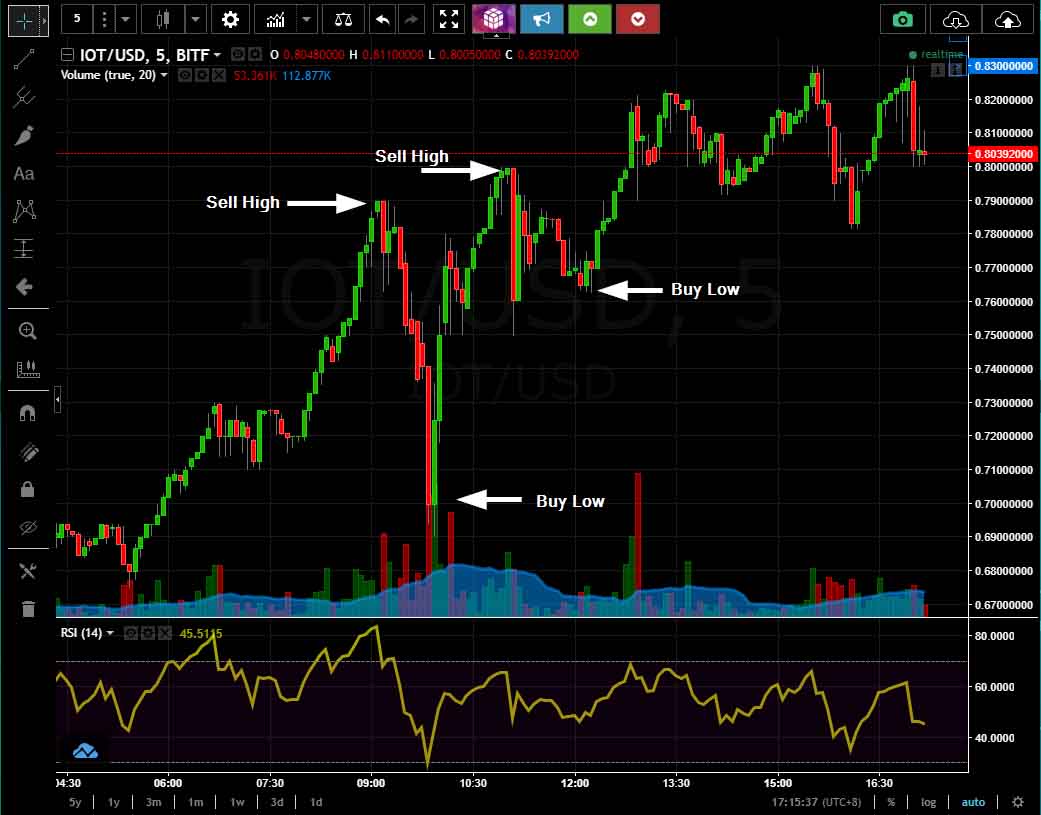 Cryptocurrency Trading is like any other trading and carries high risks. Whenever you see a potential for big profits, there are big risks connected. So it is a good idea to pay attention to the risks too.

The volatility of cryptocurrency prices is huge. I mean, if you never traded crypto, start small.

Beware of the pump and dump schemes. Besides the major crypto assets with more or less reliable volume (like BTC, ETH, lately also XMR, and some others) we wouldn’t recommend to touch anything. Where you have no volume, there is a huge risk of manipulation, or how we call it in crypto “Pump and Dump”. Some groups can organize pumps, making others to believe it will grow further, just to offload their positions. So we have big groups of “bag holders” at the end. Don’t be one of them.

The Relative Strength Index (RSI) is a momentum oscillator that measures the speed and change of price movements. RSI oscillates between zero and 100.

RSI is calculated in the following manner:-

RSI is a versatile momentum oscillator that has stood the test of time. Despite changes in volatility and the markets over the years, RSI remains as relevant now as it was when it was introduced. 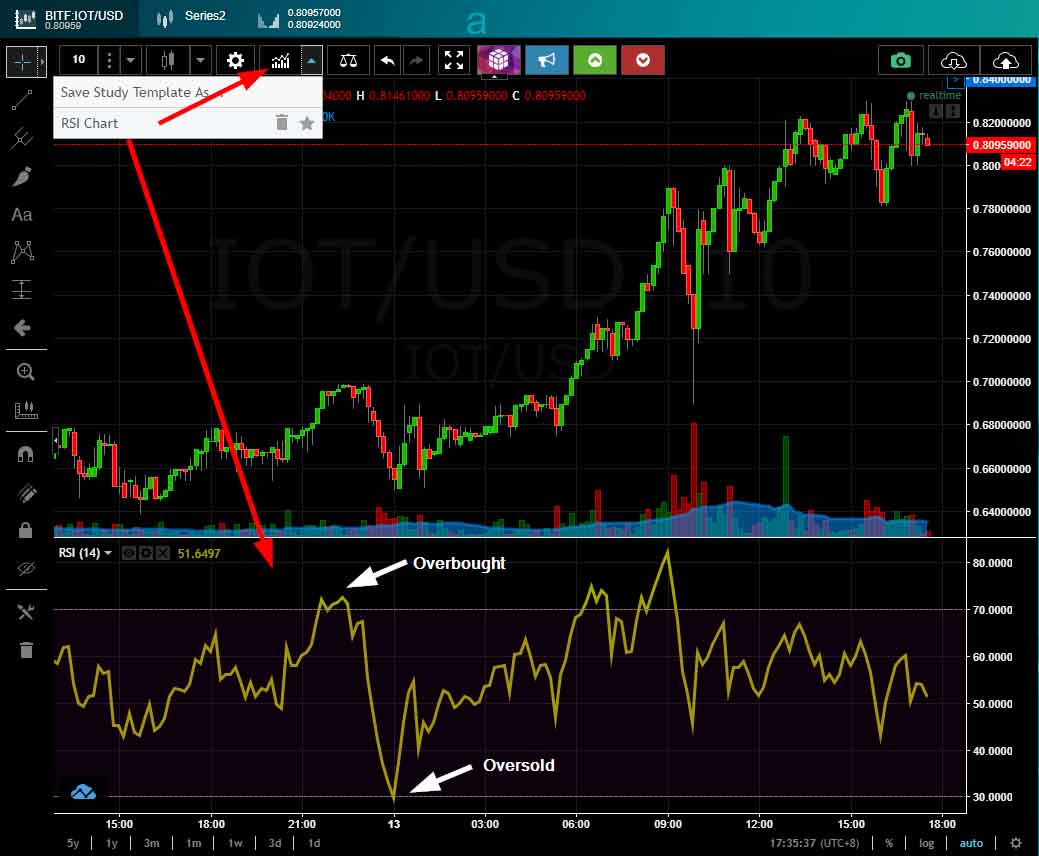 #TIPS: RSI Chart is normally not made available in exchanges. However, you can turn it on on Coinigy where it is an online trading platform that taps into the global digital currency economy and Trade on 45+ Exchanges (including CEX.io) from a single account and trade hundreds of currencies from the palm of your hand with Coinigy for Android. It allows you to access more than 75 Technical Indicators and Trade Directly From The Chart on all your favorite exchanges.

The two most frequently used MAs are the simple moving average (SMA), which is the average price over a given number of time periods, and the exponential moving average (EMA), which gives more weight to recent prices.

The trading chart below has been overlaid with the simple moving average line (blue line) in Coinigy. 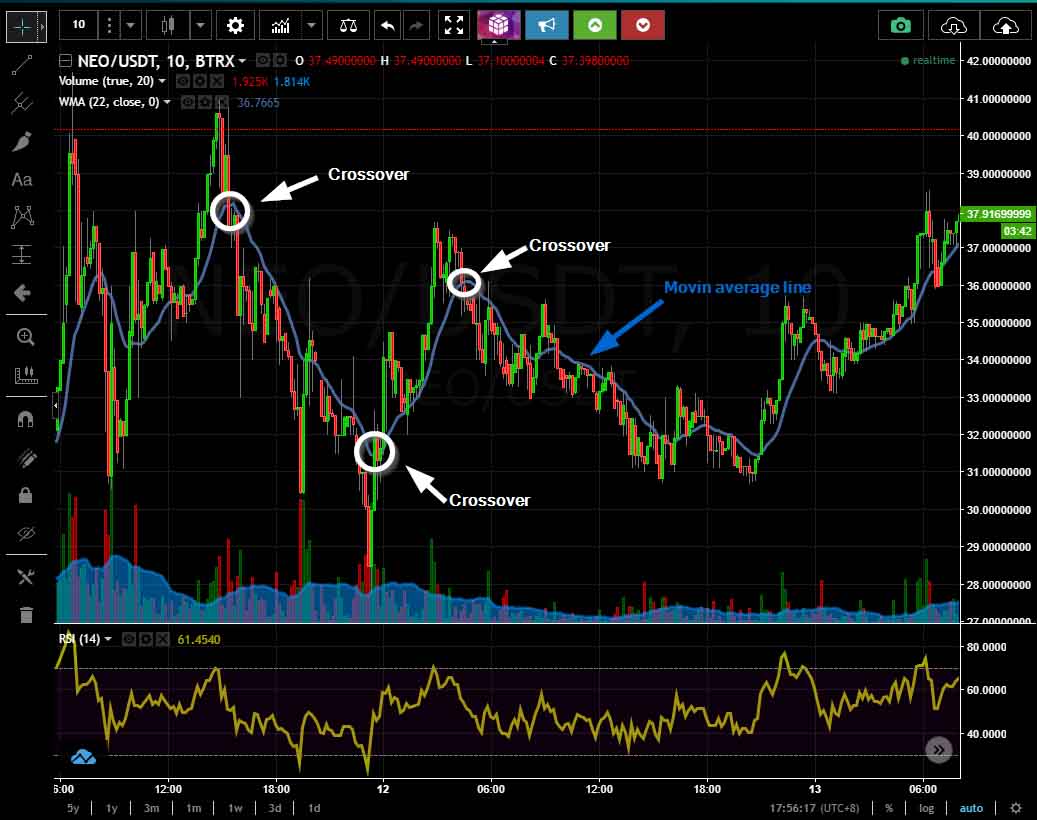 How Do You Store the Earned Cryptocurrencies?

With fiat currency like US Dollars, you can store them at the bank or in your wallet. It’s pretty straightforward.

But with digital currencies, there are a few wrinkles that you need to get your head around, but the idea is similar.

Although the general public likes to believe that their files and passwords are secure on their home computers, the reality of online security is nowhere near that false hope. Hardware wallets allow users to store sensitive information on separate devices, which offers greater security in a situation where their computer has become infected with malware.

There are several places you can keep your coins like hardware wallet – Ledger Nano S and Trezor. You, too, can store your coins on desktop clients such as Exodus and Electrum.

To learn a little bit more about how to safe keeping your coins, you can read How to Store Cryptocurrency Coin and Which Are the Safest Wallet?

If you are new to cryptocurrency trading, work out a percentage of money you can afford to lose but think of it as saving in riskier assets compared to a fixed deposit. Invest in yourself by reading about the coins but be careful of ‘get rich’ merchants. Generally, be a long-term investor until you are smart enough and have the time to trade short-term.