What Future Holds for the BTC to USD Rate?

The BTC to USD rate has constantly been making the headlines for a long time now, and it doesn’t seem as though it will cease to be a hot topic anytime soon. There have been large fluctuations in the rate with a lot of confusion from people who don’t understand cryptocurrency.

The world of digital currency boomed hugely at the end of 2017 as it exploded from a hidden part of the internet into something that became headline news. That though was never going to last and the price of Bitcoin is expected to become as stable as the likes of the US Dollar, with only small fluctuations in the future. 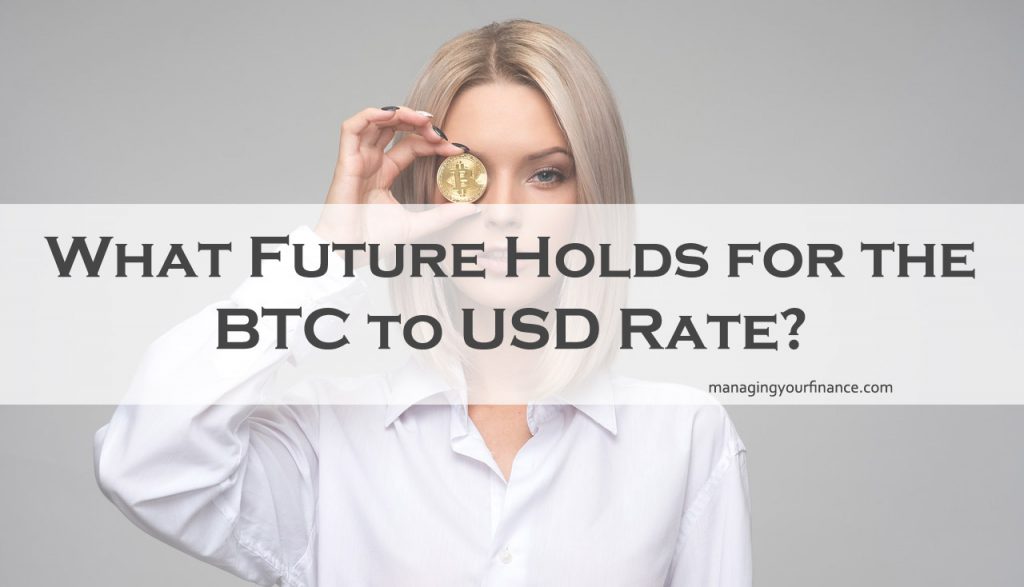 Disclaimer: The views, opinions and positions expressed within this guest post are those of the author alone and do not represent those of ManagingYourFinance.com. The accuracy, completeness and validity of any statements made within this article are not guaranteed. We accept no liability for any errors, omissions or representations. The copyright of this content belongs to the author and any liability with regards to infringement of intellectual property rights remains with them. This content is provided as general information only and should not be taken as investment advice. The opinions expressed in this article are the personal opinions of the author at the time of publication.

What Future Holds for the BTC to USD Rate?

Bitcoin is new to many

There is a chaos in cryptocurrency at the moment with it being such a new term to the wider population. While Bitcoin may have been created 9 years ago, not many people would guess that and would probably presume it started in late 2017, as that’s when it became a new story.

It’s easy to forget that Bitcoin is a currency. We say that as a lot of people talk about it as though it is a share in a company or as if it’s a commodity which can be bought and sold on for a profit. Clearly, that line of thinking has led to some of the huge fluctuations that we’ve seen with Bitcoin in the past. You can’t imagine spending money on US dollars with the hope that you’d be able to sell them for a profit, but people see that potential with Bitcoin.

While the trading of a nation’s currency is something that is done, it’s not done in anywhere near the same way or on the same scale as people trade cryptocurrencies. There will be a time when that stops and Bitcoin eventually settles down to be what it was originally meant to be, just a currency.

Where will the price settle for Bitcoin?

Will we see the highs of one Bitcoin being nearly $20,000 soon? Well, you’d have to say that it depends on many factors, and even if it does reach those heights again, it will likely be a temporary spike. Just a couple of months after Bitcoin had hit its record $20,000 for the first time, it dropped to just over $6,800, which may sound like a huge decline, but it’s actually ahead of where Bitcoin was before the November/December spike.

It was only in March last year that the price was below $1,000 and sometimes a bit of perspective is needed on just how far Bitcoin has come in such a short period of time. This isn’t a company’s share price, this is meant to be a currency, and currencies are meant to be stable.

There should be a time where people see Bitcoin as less of an investment opportunity and more as just a coin. When that happens, the Bitcoin price against the US dollar will find a relatively stable point from which it will be used. Where that point will rest will be intriguing as there is still a lot of change to come in the future for Bitcoin.

After the storm comes a period of calm

For a coin and an industry that went through a monumental change in 2017, now could be a time where a lot more patience is needed to see where the future will take it. People have now heard of Bitcoin, but a lot of people still don’t know what it is or what it’s used for. If Bitcoin wants to be a decentralized currency that can move away from the traditional banks, then that has to change.

That change, though, is going to take a long time, as people who are not yet comfortable with the technology and the new language behind cryptocurrency have to learn it and learn how to trust it as well. In the meantime, Bitcoin will continue to be traded by people who are in it to earn a profit.

People right now still have to turn Bitcoin into real US dollars to make use of it. But with a number of upgrades looming Bitcoin, there will be a time when spending Bitcoins become commonplace and people don’t have to convert them back to buy a house or a car from your local garage as easily as you would buy them with cash.

The value can’t afford to be erratic

All those possibilities mean that it’s very hard to predict what the future of the BTC to USD rate will be. Most economies value things in a similar way, so buying a Ford Focus with US dollars should cost the same relative amount as buying one with Bitcoin.

In December 2017, you could have bought that car with just one Bitcoin, at the start of 2017 you would have needed around 12, and right now it’d cost about 3.

Those 12 Bitcoins that could have bought you a Ford Focus in early 2017 would have been enough to buy you a Lamborghini Huracán by the end of it. Clearly, that is not sustainable, and digital currency will only become a part of everyday life when such fluctuations can’t happen.

A lot has to change before predictions can be made

The future of the BTC to USD rate is stability, but when that stability will come and at what price it will settle, still requires a huge amount of speculation. It now rests around the $7,500 mark and it may slip further down or rise up until it settles. A currency only has the value that other people give to it, and in the Bitcoin community, it is still a highly valued coin and one which is changing the way that people think about money.

Can You Make Money Investing in Cryptocurrency?

Next Cryptocurrency to Invest in 2018 and the Reasons Behind