Is Litecoin a Good Investment? Any Future for Litecoin?

Like bitcoin, Litecoin (LTC) runs on a blockchain, which is a public ledger of transactions that can’t be tampered with. Will the Litecoin ever catch up with Bitcoin and rise? Is Litecoin a Good Investment? Any Future for Litecoin from 2018 onwards? 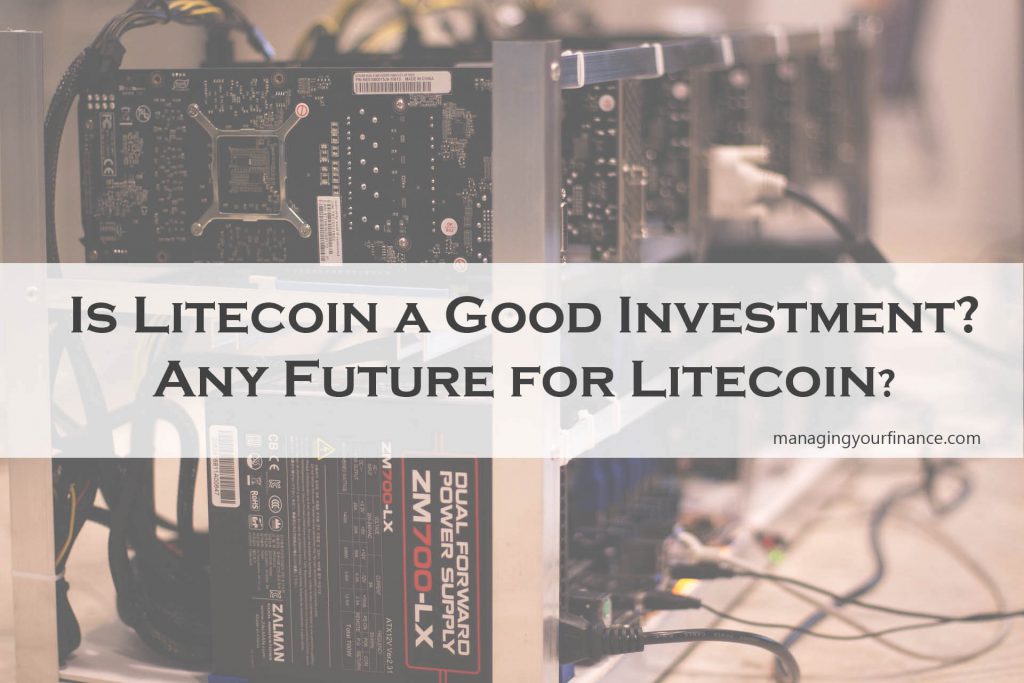 Is Litecoin a Good Investment? Any Future for Litecoin?

Litecoin has always endeavored to be a currency used for facilitating peer-to-peer transactions. As a result, it is similar in some respects to market leader Bitcoin.

Although Bitcoin is currently considered the leading cryptocurrency by market cap and adoption, altcoins such as Litecoin shows a lot of promises.

Litecoin is one of the first altcoins in existence after Bitcoin. It was introduced 2011 (BTC in 2009) and it is almost identical to Bitcoin. So any trust and adoption rate of Bitcoin should bleed over to Litecoin.

Litecoin has a solid team with Charlie Lee (head of engineering at Coinbase) as a founder of the project, who still works on it.

Litecoin is A peer-to-peer network similar to bitcoin’s handles Litecoin’s transactions, balances, and issuance through Scrypt algorithm, the proof-of-work scheme (Litecoins are issued when a small enough hash value is found, at which point a block is created, the process of finding these hashes and creating blocks is called mining).

The Scrypt algorithm used by Litecoin was intended to be ASIC (Application Specific Integrated Circuit) resistant, but ASICs are being developed for it now, eliminating the one quality that differentiated Scrypt from SHA256.

Litecoin is very similar to Bitcoin, but through tweaking to the settings, it is technically a superior algorithm. Although both Litecoin and Bitcoin are quite similar, there are some differences that differentiate between them.

Litecoin was introduced after miners started using GPUs (graphics cards) to mine Bitcoin. The purpose was to create a coin for CPU mining because GPU mining was seen as a problem by some.

Fans of Litecoin like to call it as “Silver to Bitcoin’s Gold,” as one of the best advantages of Litecoin over Bitcoin is the fast speed of block creation which makes transactions efficient and faster. The miners foresee far more Litecoins will be mined and its blocks are generated 4x faster, making it easier and faster for day-to-day transactions.

Why Litecoin Price Went Up Significantly?

#1 More Trading with Litecoin in China

Due to the recent crackdown by the People’s Bank of China on major crypto exchanges, all margin trading has been stopped and zero fees model has been eliminated. That simply means the only way to make a profit on the spot markets is to buy low and sell high. Traders can no longer short by selling coins they don’t have. If they want to be a participant in the crypto markets they need to own some coins.

Chinese whales will have to devise entirely new trading strategies revolved around the spot markets. Without margin, traders in China can no longer borrow Bitcoin to sell coins they don’t have. This means that the only way to profit off of bull runs is to actually buy and own Bitcoin.

The larger bitcoin bull trend is still intact but likely due for several months of consolidation. Given the choice between Bitcoin and Litecoin, the percentage gains for moving a smaller cap market like LTC can be much higher. Since then, Litecoin has been traded more volume in fiat than again Bitcoin.

The implementation of Segwit made Litecoin the digital currency with the best technology (in the proof of workspace). It enables much faster and secured transactions.

Most advocates are excited about the new technologies that can now be built on top of a network with SegWit. For example, the Lightning Network, which could boost Litecoin transactions by as much as a million times, can now hypothetically be used to move real money.

Litecoin is the first major currency to do so. In this regard, the silver to Bitcoin’s gold has a competitive edge over its big brother.

As a result of this successful activation, it has reignited excitement altcoins, especially Litecoin. That is why we observed the price started to grow exponentially. Many people feel this “pump” should not have taken place, as we all knew SegWit was going to activate within a specific timeframe.

LTC was just onboard on many major exchanges such as Coinbase, and other exchanges in Japan & Korea.

With Litecoin (LTC) interest perking back up breaking out of its long-time consolidation slumber, Japanese Exchange Bitbank has officially announced the listing of the digital currency in late April.

Other than that, Bitstamp announced that Litecoin fans can now also buy Litecoin on their exchange. The launch was partly the reason why the price went up and got over the resistance levels on all exchanges.

Should You Invest in Litecoin?

The future of Litecoin is bright. The first thing you should know is that everything in the world of cryptocurrencies such as Bitcoin, Ethereum, Litecoin, initial coin offerings, smart contracts has just started and it is in its infancy.

Litecoin has the potential to mimic Bitcoin prices but it will need a growth spurt in popularity for that to happen. Over the years, we have seen Litecoin has gained a lot of attention from the public and we are well aware that Litecoin is actually the first “hard-fork” of Bitcoin.

There are several reasons why we think Litecoin is going to scale and the price will continue to soar.

First of all, owing to the Lightning Network, Litecoin can transfer payments much faster and cheaper than Bitcoin, which is partly why we think Litecoin could possibly hit $500 – $700 by the end of 2018.

Furthermore, Litecoin already integrated SegWit and got on the Lightning Network. On May 10th, Segregated Witness (SegWit) was activated in the Litecoin blockchain. SegWit is the process in which blocks in the blockchain are made smaller by extracting signature data from transactions.

The first of these payments happened on May 11th. Money was sent from Zurich to San Francisco in under a second. The implementation of SegWit made LTC the digital currency with the best technology (in the proof of work space). It enables much faster and secured transactions. Thanks to scalability, Litecoin is now the only one cryptocurrency which is suit to substitute fiat money like Euro or Dollar for millions of users.

Although Litecoin hasn’t been nearly as successful, that looks to be more a function of its creator, Charles Lee, taking a backseat for years and only recently putting his full effort behind building up his cryptocurrency’s use.

Let’s take a look at the Litecoin Foundation, there’s a list of dozens of accepted retailers. We believe the list will continue to grow.

Litecoin hitting $1,000 dollars would mean it would have a market cap of $50–60 billion. That is certainly achievable if BTC is already in the trillions. Hence, Litecoin is definitely a good investment option.

Additionally, Litecoin is less political, of which Bitcoin is plagued with internal political wars over who controls the future development of Bitcoin. Bitcoin is so massive that any single change may require a year of infighting. SegWit took more than a year to get activated.

From the abovementioned key points, Litecoin has a lot more advantages over Bitcoin. The Bitcoin rate spike, still alive despite bitter divisions in the community that supports the cryptocurrency, has laid bare the biggest problem with Bitcoin: Compared with fiat currencies, it’s painfully inconvenient and expensive to use as a means of payment.

The transaction fees are raging due to several factors. One is the size of the block in Bitcoin’s blockchain, which is limiting the number of transactions that can go through at any given time. Bitcoin’s network is powered by miners, people, and companies who use a tremendous amount of computing power to create new bitcoins.

This is definitely not good for Bitcoin. A few bucks (or even a few dozen bucks) per transaction isn’t a deal breaker for investors, but for someone who wants to use Bitcoin as payment (which is kind of the point of Bitcoin in the first place) that’s far too expensive. We believe over time, Litecoin can grow when people will look beyond Bitcoins for cheaper transactions.

Whether or not Litecoin will surpass Bitcoin, it doesn’t matter if you are investing in cryptocurrencies for long-term profits. Both Bitcoin and Litecoin are new technology and they are going to grow anyway.

Where Can You Buy Litecoin?

Buyer Beware When Investing in Cryptocurrencies

Just because Litecoin is a better technology doesn’t mean that you should jump in. The majority of the price value in cryptocurrencies is based on future hopes and speculation.