In my previous post on Should You Invest in Ethereum, I talked about the future of Ethereum and its stability in terms of investment. Within three weeks, the price of Ether has soared more than 200%. If you read my previous post and bought some Ether, congratulations! You are now richer than you were three weeks ago. However, will Ethereum rise and become the next Bitcoin? Is Ethereum the next big thing after Bitcoin? Read on and find out. 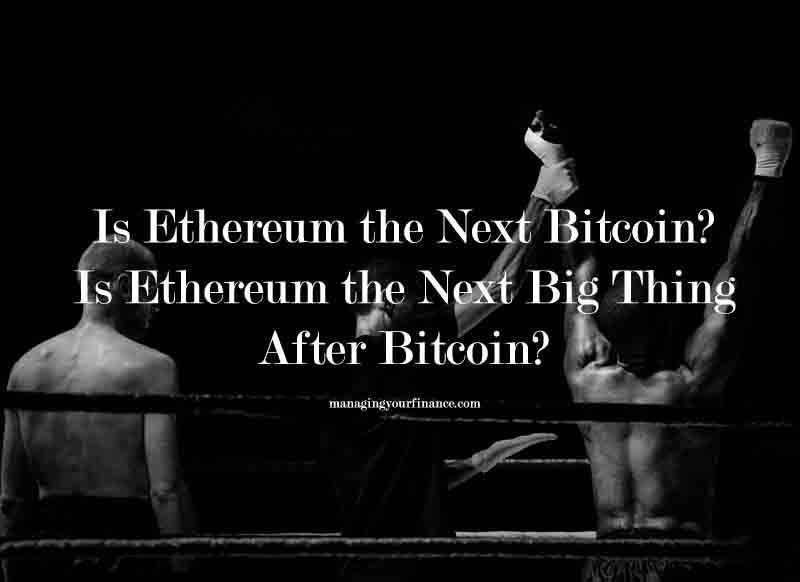 Disclaimer: The content on this site is provided as general information only and should not be taken as investment advice. The opinions expressed in this article are the personal opinions of the author at the time of publication.

There are differences between Ethereum and Bitcoin.

While both Bitcoin and Ethereum are powered by the principle of distributed ledgers and cryptography, the two differ in many technical ways.

For example, the programming language used by Ethereum is Turning complete whereas Bitcoin is in a stack based language. Other differences include block time (Ethereum transaction is confirmed in seconds compared to minutes for Bitcoin) and their basic builds (Ethereum uses ethash while Bitcoin uses the secure hash algorithm, SHA-256).

Bitcoin and Ethereum Differ In Purpose

Bitcoin is created as an alternative to regular money and is thus a medium of payment transaction and store of value, Ethereum is developed as a platform which facilitates peer-to-peer contracts and applications via its own currency vehicle. While Bitcoin and Ether are both digital currencies, the primary purpose of Ether is not to establish itself as a payment alternative (unlike Bitcoin) but to facilitate and monetize the working of Ethereum to enable developers to build and run distributed applications (ĐApps).

With Bitcoin, there is an industry developing to provide wallets and applications for peer-to-peer payments, the “internet-of-money”. Although it is possible to get an Ethereum wallet and exchange ethers across the Ethereum network, there seems to be no intention in Ethereum to develop it as a payments network, nor to encourage other developers to do so. Payments with ethers are a possible use of the network, but, as a “World computer”, Ethereum should be capable of much, much more.

Further reading: What Is Ethereum?

I bought Ethereum in the double digit territory and its development roadmap looks promising, albeit quite experimental. ETH has considerable potential as a high alpha investment. If you look at the growth rate of Ethereum, it is currently winning the race against Bitcoin.

As you can see from the Percentage of Total Market Capitalization chart below, Ethereum’s market capitalization is racing at a higher rate. At the time of writing, ETH occupies nearly 17% of market dominance ranking 3rd in terms of market cap amongst all outstanding digital assets. On the other hand, BTC has lost 40% of market share YTD, while only experiencing a 2X increase in nominal price (USD).

Note: Although Ripple is currently the second in the chart, bear in mind that Ripple is aimed at solving different problems from those Bitcoin is trying to solve and it is not a public blockchain. Originally, Ripple was aimed at providing a decentralized exchange of arbitrary assets. Today, Ripple is aimed at providing high-speed, low-cost payments between different currencies and even different payment systems. The total supply is 99.99 billion XRP. Even it reaches 1$ per XRP, market cap will be 100 billion$. The total crypto world doesn’t have that much valuation.

The launch process of Ethereum is divided into 4 milestone phases (the release steps) in order to give the development a structure and thus to proceed as quickly as possible.

The initial release of the Ethereum network that went live in July 2015. It was a bare bone beta release that allowed developers to learn, experiment, mine Ether (ETH), and begin building Dapps and tools.

The second major version of the Ethereum platform and the first production release of Ethereum, which was made public in March 2016. It included several protocol revisions and a network change that provided the ability for further network upgrades and sped up transactions.

The next phase of Ethereum development will be “Metropolis,” which is intended to provide greater flexibility to smart contract developers. Metropolis is the release that opens the gates to the masses. This is where there are fully fledged and tested user interfaces for the non-technical users. Although this is now being performed by individuals – for Ethereum the Ethereum desktop wallet. In short, smart contracts will eventually be able to automatically pay their own fees, eliminating the need for users to externally fund smart contracts themselves.

A key goal of this phase will include the transition from proof-of-work (mining) to proof-of-stake (virtual mining) using the Casper consensus algorithm. One of the benefits of this transition is the reduction of external resources required for mining, as well as reducing the large amounts of electricity consumed in the process. There will also be an introduction to blockchain sharding which is the process of ‘cutting up the blockchain into thousands of pieces, that will allow each running node the ability to approve only their piece (or shard) of the network instead of having to do every bit whether it’s theirs or not.

The vision of the Ethereum’s development team is to build an unstoppable censorship-resistant self-sustaining decentralized world computer that can perform calculations, store data, and allow communications. The technology is currently immature and yet everyone is talking about it. As it progresses, the more people use it, test it, develop it and build on it, it will improve and become more robust.

That also implies the price of Ether will, perhaps, overtake Bitcoin one day.

There are some possibilities where Ethereum as a cryptocurrency may explode in Value like how Bitcoin did and there reasons alike that prevent it from doing so.

Ethereum is a blockchain which has tremendous capabilities in comparison to the Bitcoin Blockchain. One of the major factors that come into the picture for valuation of any asset is demand for the product and in this case its the currency.

Ethereum as a generalized platform to write and execute contracts apart from just transferring financial value sets it apart from the Bitcoin Blockchain in terms of motive.

There are several factors that affect the growth of cryptocurrencies such as Ethereum and Bitcoin.

Community: The community that provides support for the blockchain and harbors its growth impacts a lot in the early stages of any cryptocurrency altogether. Bitcoin community is comparatively the older one among the two, although Ethereum is harnessing a vast developer community that taps into core concepts of Ethereum, being Smart contracts.

Remove smart contracts and its ease of programming into the blockchain, Ethereum community and gradually Ether as currency would cease to exist.

Bitcoin is primarily the first blockchain to ever be implemented and there wasn’t any death for features apart from just transacting value easily over a decentralized network albeit the community is pretty huge and growing strong.

Both, Bitcoin and Ethereum are neck-to-neck at par with each other.

Long term goal: Bitcoin early adopters get a huge margin of capital gain over time and Ether value generally deteriorates over time since there isn’t any cap as to how much Ether can be produced. Ethereum applications can be built a lot more easily and constructed in various ways to monetize and target specific sectors of the market to cater to their needs.

If you ask me if Ethereum the next big thing after Bitcoin, the answer is absolute yes. However, Ethereum is not going to replace Bitcoin.  Ethereum positions itself as a complement to, rather than a competitor with Bitcoin.

Personally, I believe that Bitcoin is more valuable to hold on to for the long run and Ethereum can be used for building applications and minute transactions and I do not count on Ethereum spiking up in Value as the Bitcoin did although I might be wrong as people start accepting Ethereum given that Ethereum isn’t as volatile as Bitcoin, It certainly has greater chances of being accepted and used in a day to day basis as norm compared to bitcoin.

Ethereum has a far better chance of being accepted as a currency norm than Bitcoin and that might give it the edge over bitcoin although I wouldn’t put all my eggs in the same basket.

If you’re asking if you should buy Ethererum or Bitcoin for long-term investment, then my recommendation would be to buy both, in small amounts that you’re comfortable losing.