Ethereum has been one of the top-performing cryptocurrencies in the world since early 2017, some say the price per Ether is going to surpass Bitcoin by 2018/2019. The rise of Ether is still at its beginning. It is not anywhere close to its potential yet. What do you think? How high will Ethereum go? Will Ether reach the price of Bitcoin by 2018/2019? 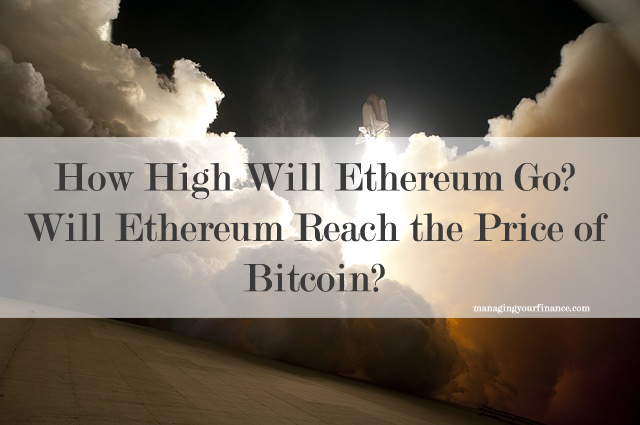 Disclaimer: The content on this site is provided as general information only and should not be taken as investment advice. The opinions expressed in this article are the personal opinions of the author at the time of publication.

How High Will Ethereum Go?

Ethereum definitely has a huge potential to go beyond Bitcoin in terms of their market cap. The number of transaction on the Ethereum blockchain has spiked since the announcement on the Enterprise Ethereum Alliance (EEA) that connects Fortune 500 enterprises, startups, academics, and technology vendors with Ethereum subject matter experts.

Institutions like Microsoft and JPMorgan have pledged their support to the development of Ethereum through the formation of the Enterprise Ethereum Alliance. The purpose of the alliance is to ensure the potential of Ethereum is realized across industries.

Although many organizations are invested in leveraging Ethereum to serve as a basis for privatized versions, the overarching goal is that one day, each institution’s private networks will be connected to the global Ethereum blockchain. This will establish a new universal benchmark for information transactions.

While the general public is just becoming aware of Ethereum, it already also has the backing of major global corporations.

The recent surge of Ethereum price has a few reasons behind.

#1 Availability to buy ETH from Exchanges. Exchanges have gotten easier to use and safer. Just a year ago, in order to invest in any altcoins, you first had to buy BTC, then go to an exchange like Poloniex. Now, you can buy ETH directly from Coinbase, and then use Shapeshift or Changelly to move into another currency without an account.

As per today, we have a few major exchanges that people can buy Ethereum directly without going through the process of exchanging BTC for ETH. Now that users can directly convert their fiat currency into ether using familiar platforms, the price is increasing as that demand is being realized.

Exchanges above now let you turn dollars, CNY, and euros into BTC and ETH. This has definitely propelled some of the market’s growth. Just like anyone else, when you see something increase in value tenfold within a month, you want to be a part of the action.

#2 Media coverage. Blockchain technology and cryptocurrencies are getting a lot more press and news coverage, particularly from Ethereum. After the two digital currency conferences in New York, the interest on “Ethereum” has significantly increased. Google Trends showed inquiries on “Ethereum” leaped that month to their most in at least five years.

If you notice, the search on Ethereum has since then remained high after the conferences.

International interest in Ethereum also has intensified this year.

If you look at the list of events of upcoming local and international Bitcoin, Blockchain, Fintech, Payment events and conferences including summits, workshops, hackathons and masterclasses for this year, you will see there are a lot of happening events that will boost the price make headlines on most media coverage.

What important media coverages that boost the Etherum price?

According to the Russian President’s official website, Putin met with Buterin on June 2. “The conversation was held following the President’s meeting with heads of major foreign companies and business associations.”

Russian President Vladimir Putin and his economic team have long been under the impression that, to wean the country off its oil dependence, they needed a major leap in some specific area of technology that wasn’t yet dominated by Western, Chinese or Japanese tech giants. Their latest hopes are being pegged to the Ethereum blockchain platform.

As you can see of now, Russia is integrating Ethereum in their banking system as a pilot project. If they find beneficial to their economy then they will go with this for sure.

The shift toward Ethereum is part of a drive to capture a competitive advantage ahead of the West, China, and Japan, diversifying Russia’s economy away from oil.

An increasing number of central banks and governments are working on digitizing their national currencies. China and Russia are investigating the potential of Ethereum as the base protocol for a digital Yuan and Ruble respectively.

It is a huge milestone for the cryptocurrency. It’s an important proof of concept for the rest of the world to see. With Singapore moving to tokenize, they’re effectively giving permission to a lot of other nations that it’s okay to do the same thing. This permission will give us insight into how traditional currencies will operate in the decentralized era.

Mike McGovern, the new head of Investor Services Fintech Offerings at Brown Brothers Harriman & Co, among America’s oldest private banks said “…”When looking at Bitcoin Blockchain versus Ethereum, there’s no doubt Ethereum is superior. It doesn’t cost as much to mine Ether tokens because it requires less electricity than Bitcoin. Ethereum is not only cheaper than Bitcoin, it is also more robust and has more applications outside of simply financial transactions such as represent virtual shares, assets, proof of membership, and more..”…”

According to Aragon Co-founder,  Luis Cuende said in an interview with Sindre Hopland, the media producer at Itnig that Ethereum can reach $1000 in a couple of years at the beginning of 2017 and it hit that target in January 2018.

Olaf Carlson-Wee, chief executive officer of cryptocurrency hedge fund Polychain Capital said in an interview with Bloomberg: “What we’ve seen in Ethereum is a much richer, organic developer ecosystem develop very, very quickly, which is what has driven Ethereum’s price growth, which has actually been much more aggressive than bitcoin,”

Fred Wilson, co-founder and managing partner at Union Square (NYSE: SQ) Ventures, said: “The market cap of Ethereum will bypass the market cap of Bitcoin by the end of the year”.

Predicting the price changes in any market is tough.

The old advice from the likes of Warren Buffett says you should put your money in a stock index fund and let the experts trade, as the short-term movements of the market are incredibly difficult to predict.

It’s even tougher to predict a highly volatile market such as Ether.

One way to look at Ethereum is to read up and make an informed decision on the long-term prospects.

Here, I would like to highlight that Ethereum plans to switch from Proof-of-Work (PoW) based mining to Proof-of-Stake (PoS) mining. Once Proof of Stake is released. We will definitely see an unprecedented increase in price.

That’s partly because current ETH mining creates approximately 1.3 million ETH per month, which dilute the ETH supply in the market as the miners sell their ETH to the market. PoS would only create 13,000 ETH per month in which it will lead to high demand!

Hence, moving on to PoS will reduce inflation and coins will worth a few more times than now.

So, fasten your seatbelt and get ready!

As more and more companies begin to forgo building their own blockchain and building on Ethereum, more services and people will need ETH to run their operations. This will make ETH incredibly useful and valuable, raising the price.

What’s your prediction for Ethereum? Share your thoughts below!

Should You Invest in Ethereum and Where to Buy Ethereum?