Current (CRNC) ICO Review | Should You Invest in Current ICO?

Current (CRNC) public token sale is one of the ICOs that is presently under the radar but it has an enormous potential as it has already a working product. Should you invest in Current ICO and get some CRNC tokens for long-term profits? Read this unbiased Current (CRNC) ICO review to find out more. 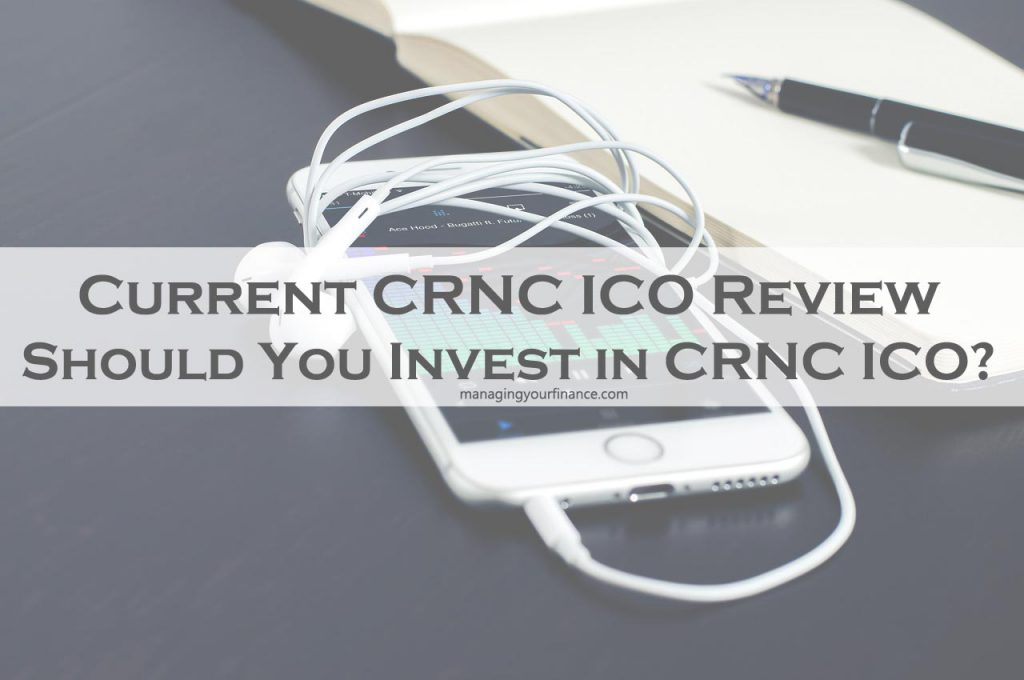 What Current Is Trying to Solve?

Almost all of us are exposed to media such as Netflix, YouTube, and Spotify. However, multimedia content consumers’ interests or favorites on these media platforms are not shared among themselves and very often they do not know what we after. Today, four major companies own the internet’s data and they are Apple, Facebook, Microsoft, and Google. These data are not being shared and synchronized in one ecosystem.

The abovementioned problem is what Current is aiming to solve by building a blockchain-based solution to unify the fragmented media content. That simply means the Current platform provides a simpler and yet, more straightforward media search by consolidating disparate content sources into one single platform.

Current’s proprietary recommendation algorithm leverages both Content-Based Filtering and Collaborative Filtering to selectively pull out the media that users are most interested.

In laymen’s terms, with the combination of both algorithms, keywords are used to describe the media content and a user profile is built to indicate the type of content the user likes. Other than that, it implements the method of making automatic predictions (filtering) about the interests of a user by collecting preferences from many other users.

Current is a hybrid product, with both on & off-chain solutions to accommodate shifting market dynamics in the blockchain & media industries.

A protocol interacts within the Current platform in addition to any other host media network. The protocol is designed to incentivize consumers to play media and rewards them based on their consumption time, data shared, and contributions within the ecosystem.

Current is creating a digital token (CNRC) that uniquely rewards a person’s time, money spent, and data shared during the media streaming experience. This token can be used on a broad range of products, services, and in-platform advertising.

Whenever a media consumer views content, CRNC is mined (created). The consumer can utilize this earned CRNC to enjoy premium services. Meanwhile, the content creator is equally rewarded and depending on the level of popularity, curators are rewarded for the providing the most popular content. Not only that, CRNC tokens can be used as a cash substitute within the Current app for digital and physical goods. In the long run, Current intends to reward CRNC to partner platforms who host the Current protocol on their sites.

Current uses Blockchain technology to bring the revolution in streaming because Blockchain provides a transparent system for accounting and instant reward of time, data and efforts. Moreover, the CRNC offers a protocol that allows users more options on how to pay for content and gives all duly involved a better form of compensation.

CRNC tokens will be implemented on the public Ethereum blockchain as an ERC20 token as its interface allows for the deployment of a standard token that is compatible with the existing infrastructure of the Ethereum network.

Should You Invest in Current ICO?

Dan Novaes, CEO – Dan is also the founder and CEO of MobileX Labs, the app-solutions company behind Nativ, a free mobile-app builder. MobileX Labs provides a mobile application platform where users can create fully functional apps for iPhone and Android that cost significantly less than creating an app via a developer or a development studio.  Based on the record, Dan, no doubt, has a tremendous experience in this field and definitely knows where Current is heading to.

Nicholas McEvily, Co-founder, Chief Product Officer – He led the design and development team at Pairade. He was also the Founder and Principal at agrowculture. Honing his skills in Brooklyn, NY at Mouth.com and then the halls of Lightbank in Chicago, IL, Nick got his start at Cornell University’s College of Human Ecology studying human-centered design.

Kiran Panesar, Co-founder, Chief Technology Officer – He is also the Co-founder and CTO of MobileX Labs. He has worked on a broad range of technology stacks and built dozens of native iOS apps (Objective-C, Swift) with Ruby on Rails backends. Several of these projects have reached the top 10 App Store charts, and 2 of have hit #1 in the App Store.

Mark Cuban – He is a serial entrepreneur, investor and also the owner of the National Basketball Association (NBA)’s Dallas Mavericks, co-owner of 2929 Entertainment and chairman of AXS TV.

Galia Benartzi – She is a serial technology entrepreneur and Business Development at the Bancor Protocol, a standard for the creation of Smart Tokens™, cryptocurrencies with built-in convertibility directly through their smart contracts. She is also a founding member of Powder Mountain, permanent home of the Summit community in Eden, Utah, and creator of the Eden2Zion Reality trips by the Schusterman Foundation.

Eyal Hertzog – Eyal has been a venture-backed technology entrepreneur for over 20 years. He was the Founder of MetaCafe, Israel’s fastest growing video sharing site, reaching over 50 million unique users at its peak. Currently, Eyal is the architect of the Bancor protocol, the Bancor Network Token (BNT), and the suite of end-user products that utilize it.

Dave Hoover – He is the co-founder of Dev Bootcamp, heading of Engineering at Raise, Ethereum developer of ConsenSys. 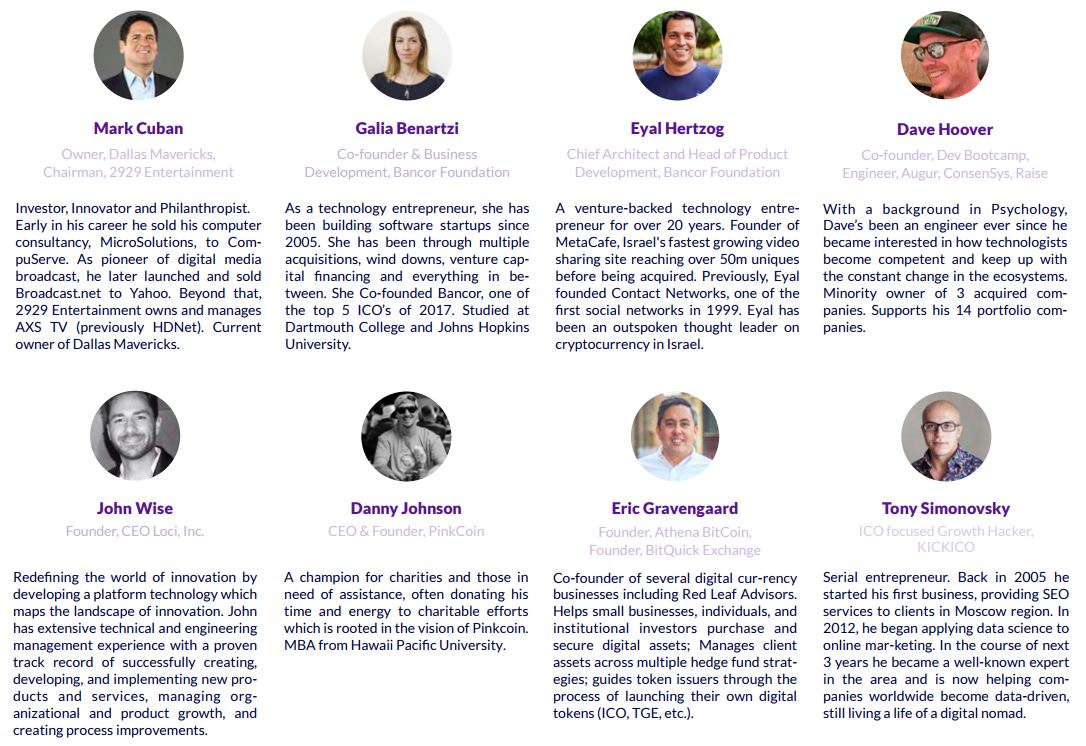 One of the strongest attributes of CRNC is its accessibility and immediate impact for users. Current allows users to start earning CRNC tokens immediately without any entry barriers. With an estimated buying power of $44 Billion, Gen Z is spending more than five (5) hours per day on their phone, making them well positioned for cryptocurrency adoption.

At the time of writing, there are already more than 200,000 users have already engaged with the platform, though these numbers are not available for independent verification. With an app out in the market, the team have reached a product development milestone that evidences both their commitment to the project and ability to deliver. 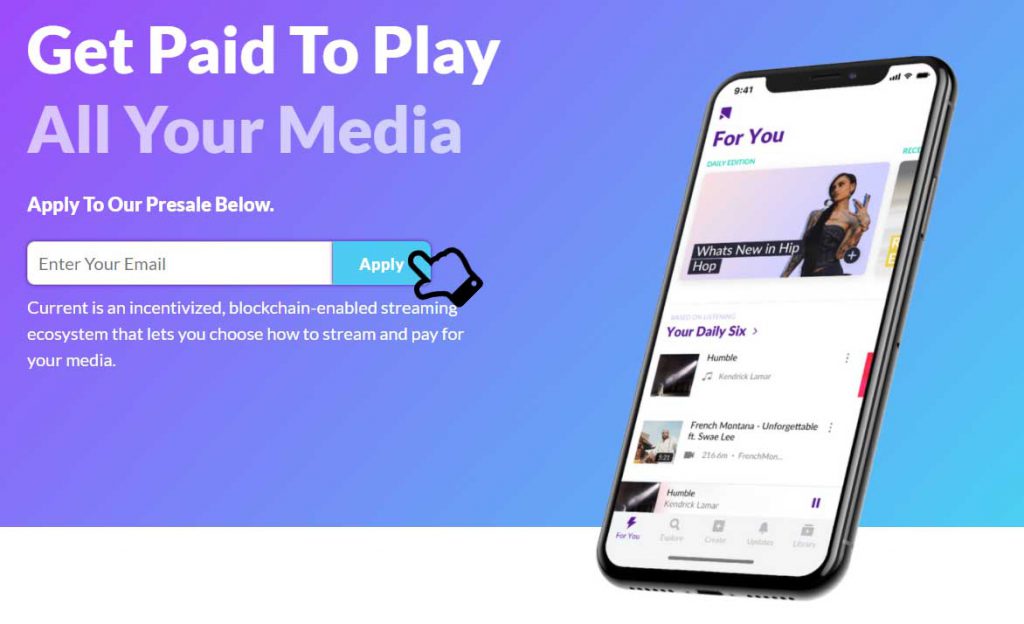