Many countries have voiced concern at the growth of ICO fundraising. At the time of writing, there are more than 200 ICOs being carried out in 2017 alone. Is it true that all ICOs are scams? Most of the ICOs are just pump and dumps schemes? It is true that many of them did not deliver and only a fraction of them are legitimate. 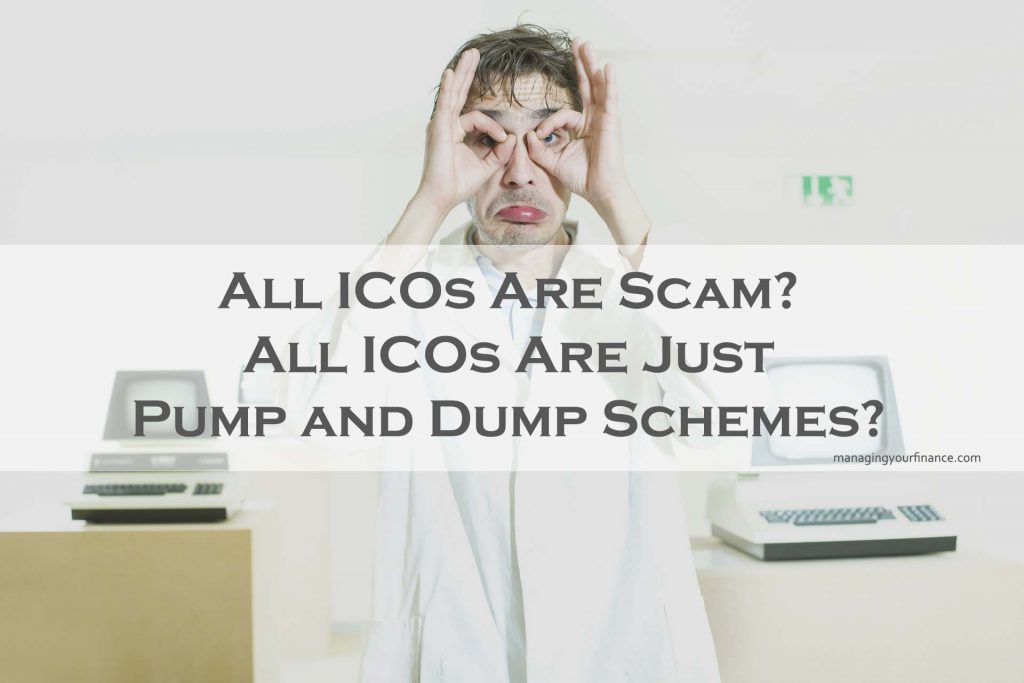 It’s an incredible amount considering that ICOs were unheard of just five years ago.

ICO is an unregulated way of raising funds is harnessed by legitimate companies to get direct access to a broad network of investors. Ultimately, the idea and the background of ICO are good. Anyone should be able to invest in any business they think has long-term legitimacy.

Despite some promising projects, there is a widespread concern around the accountability of all ICO projects and the potential for scams, money laundering, and other illicit activity.

Various governments have raised their concerns about cryptocurrencies and have issued guidance on them, while the recent ban of ICOs in China and the rumors of Chinese regulators shutting down crypto-exchanges led to sharp decline in crypto-market.

In fact, not ALL ICOs are scams. Many of them have good visions but may not have the fundamentals to turn their project into a real business.

There have been plenty of success stories. For example, In 2014, Ethereum, promising to bring a turing-complete language to the blockchain, raised over $15 million (in BTC) through an ICO-like fundraising period. The value of an Ether hit a high of US$14 per Ether in 2016. Now, you can check out the Ethereum price in the market – more than $200.

At the same time, there are many ICO scams and the list grows longer every day. GameBet Coin (GBT) is one of the prime examples that raised more than 200 BTC during their ICO. At the end, they didn’t manage to deliver.

Why Are People Scammed In Most ICOs?

We have heard many investors making fortune in 2016. This is where the problem comes in. With the insatiable hunger of investors to find the next Ethereum or Bitcoin, due diligence is not at the top of our priority as the fear of missing out (FOMO) sets in.

Most people are new in the world of cryptocurrency, that’s partly because cryptocurrency is a new technology. Although there are whitepapers in all ICO official webpages, there is a loss in information translation when the technical explain their vision and how-to to the non-technical.

One of the major issues is the lack of high-quality non-technical information. As you can see, most information is currently being shared amongst forum members such as Reddit, Bitcointalk, and Slack channels. People read and consume the information as it is without doing proper researches. They follow the crowd and possibly dump their hard-earned money into a potential scam. If you pay enough attention, most people who share information on a certain project are mostly the project owners themselves.

Ironically, some investors even have some Ether contributed to those scams even though the name suggested as such. For example, ScamToken – 100 Percent Bullshit and Useless Ethereum Token. They were not designed to be taken seriously. Yet, they managed to raise some good money from the crowdfunding. Useless Ethereum Token has raised over $40,000 in just under three days.

ICO should definitely be regulated somehow, meanwhile, there are ways to recognize scams.

How to Know If an ICO Is Worth Investing?

Many ICOs lack legitimacy. All the scammers need is a wallet, a Whitepaper and a working website and they are good to go. Hence, we strongly suggest doing a serious due diligence before taking part in an ICO. We have compiled here a checklist here to identify which ICO is worth investing.

#1 First of all, studying the project’s whitepaper is essential as it is a document that tells potential investors about the project’s architecture, the market, and the risks. The project developers should be able to clearly define the purpose of their project that laymen can understand. That also means the information shouldn’t be too vague and all details should be captured in the document.

If some of the members have completed successful projects in the field of blockchain or ICO before, it stands a better chance to be a legitimate ICO. A good sign of a potential ICO is if the developers link their LinkedIn, GitHub, or Twitter handle on the ICO’s website. Research their credentials and past posts on Twitter.

For every good project, team members should be constantly sharing updates and ideas on their website, social media platforms, blogs, and other public channels on the internet.

#3 In general, you should avoid uncapped ICO as you won’t know how much tokens will be created during the presale and crowd-sale. Simply put, imagine a traditional fundraise where investor asks “how much are you raising?” and the answer is “we won’t tell you”. A bad player may bet on a drop in the value of each token and eventually devalue your token holdings. Some projects drain the value out of your tokens by creating new tokens. Unless you are so sure and believe the people behind the project. Else, avoid uncapped ICO at all cost.

#4 Check how active this token’s community is on different forums such as Telegram, Bitcointalk or their Slack. Most ICOs have dedicated Slack or Telegram support channels serving the community. Due to the open nature of these platforms, it is still difficult to identify legitimate representatives of the actual ICO. Although this may not be a good way to make sure the success rate of the ICO, you may still be able to post smart questions to the project owners and observe how the questions are handled professionally. The sooner you can identify and ask your questions, the better your chances are at getting them answered.

#5 You should be completely aware of what happens after the ICO is over and how the generated funds will be used. One of the most important questions each project needs to answer is what is the token for? The company should announce how will they manage the capital raised: how much will be assigned to the contractors, advisors, marketing, etc. All this information should be in accordance with the roadmap.

#6 It’s always a good idea to check out how equity and ownership are distributed among the founding members. According to Nick Tomaino, Principal and blockchain expert at Runa Capital, the founding team should always maintain a 10-50% share of the company to help create a healthy working environment for the company and its investors.

Hence, check their token distribution. If more than 50% of the tokens is planned to be distributed back to their own people, that’s suspicious.

#7 Do not invest unless there is a product or you can see clear signs of the product being built.

#8 Having a roadmap is also crucial for the success of the ICO. We need to know the plans and vision of the company before funding their project. The timing is also very important in order to justify the capital required in the Initial Coin Offering.

Historically, prior to the dot com crash in 2000, close to 400 Initial Public Offerings (IPO) were carried out in 1998 and more than 500 IPOs in 1999.  Are we seeing the same phenomena happening this time on ICOs? Hence, it is crucial to do your due diligence before participating in any ICOs.